This was one of those “you couldn’t make this stuff up” days.

We knew we were spending tonight in Charlottetown. We had a few recommendations for things to do in PEI. And my grandfather was born in PEI, so I wanted to see where he grew up, though I only had a rough idea of where that was. But beyond that, we didn’t have any concrete agenda mapped out. We were winging it. And in that spirit we made one final stop on our way out of Halifax to see an artifact of the great Halifax harbour explosion of 1917. The plaque says it all.

Then it was off to PEI, which is a comfortable 3 – 4 hour drive, including a rather impressive drive across a 10 km bridge. Somewhat arbitrarily, we picked Cavendish for our first stop, followed by Scotchfort, which is where (I think) my grandfather lived. Our GPS decided to take us to Cavendish park. We hadn’t intended to stop, but admission to all National parks is free for Canada’s 150th birthday so we decided “what the heck”. Good call.

The park has a beautiful sand beach with grass covered sand dunes just behind the beach. Today was the warmest day of our trip so far, so it was lovely walking barefoot along the sandy beach.

And of course, we continued the tradition of touching the bottom of the ocean, by adding the PEI coast to the list.

The wildflowers just behind the beach were stunning.

Now this is where it gets interesting. On a whim we googled “McEachern PEI” and found KnitPickers by Margaret McEachern – in Cavendish. We decided it would be rude if we didn’t stop by and say hi. By the time we left, an hour later, we had learned that we were quite likely distant cousins through Sandy Alexander McEachern, who was apparently quite a character. He was a rum runner, operated a gambling house, and nearly lost the family farm. And that is just the stuff that people remembered. We discovered that the McEacherns are in fact a distinct clan (not an offshoot of the McDonalds, like we have always been told) and that there is a gathering of the clan planned for next year to make it all official, including the adoption of our own tartan.

All of this new information required a change of plans. We headed east to Souris (pronounced “Surrey”) to find the seat of the McEachern clan. I’m not completely sure about this, but I think we may have found my great great great grandmother’s grave.

… and the church where they worshiped. 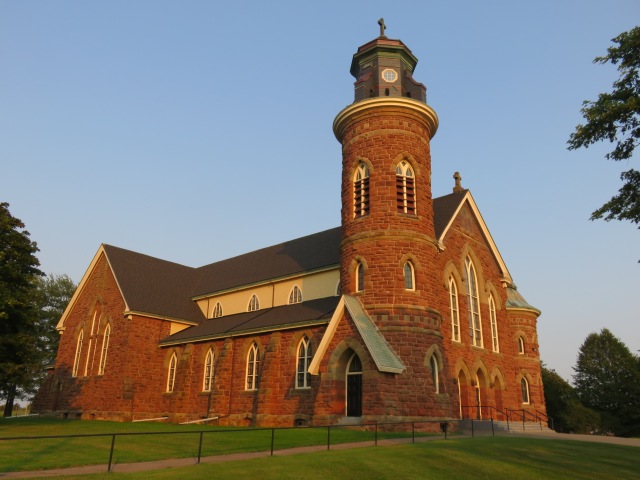 By the end of the day, I’d pushed my family history back another four generations.

Our original plan, such as it was, involved arriving in Charlottetown late afternoon and exploring the town. Instead, we found ourselves an hour out of town at 7:00 PM.

I think there will be many evenings researching genealogy in my future. Like I said, you just couldn’t make this stuff up.