The Christmas market opened today so we had to check it out. The vendors were thrilled to be there – last year the market was closed because … well, you know why. But this year everyone was out in force, including Père Noël.

It was the first day the market was open, and it was a Thursday night at that, so it was relatively quiet, but it was still fun to wander around and take in the sights.

And even outside the market, Christmas themes and lights were everywhere.

Tomorrow we take the train home, but we will be back.

We ate dinner tonight in a wonderful Italian restaurant a short walk from our hotel. It was packed with a familiar mix of tourists and business people enjoying a night out on the company’s dime. It felt like 2019. At least after we sat down and took off our face masks. Of course, before we were even shown to our seats we had to show proof of vaccination and our ID. Everywhere around us we see a disorienting mix of the familiar and the utterly strange these days. Imagine, if you will, walking into a bank two years ago wearing a mask. Now imagine the reaction if you walked into a bank today without one. On the streets masks are relatively rare, though you are not surprised when you do see one. It almost feels like being in Asia five years ago. You’d almost think that they had experience with pandemics. Oh wait…

A few random photos from our day in Quebec city (a destination that I recommend without reservation).

We had not anticipated just how non-flat Quebec city was. Our legs are paying the price, so we opted for the funicular when we visited the Plains of Abraham today. The wonderful views were included in the very reasonable price.

Another photo of the Chateau Frontenac – one of the most photographed hotels in the world. Of course, that is what they would say. But based on this blog, they are probably right.

Another world heritage sight added to our list. Only another 1100 and so to go.

Day two in Quebec City and we are in love with the city. The old city is … well … old. In a very good way. So there are lots of narrow streets and alleys loaded with character. And the food. Oh my! The food is simply amazing. It feels just like going to Europe, but without the jet lag.

We spent today wandering around the old city enjoying the ambience and looking for places to eat dinner. It’s what we usually do when we travel. One of the interesting things we saw was this building mural, which was amazingly lifelike. The characters in the mural are key characters from the last 400+ years of Quebec history.

Here is another smaller mural.

There isn’t any snow on the ground yet, but it is getting cold. In fact it was cold enough that we had to visit Simon’s, the local department store, to buy a warmer coat. It wasn’t just the temperature – the stiff wind was funnelling through that narrow streets and making it feel even colder. These pictures give you some idea of just how windy it was.

The Christmas markets open later this week, and we plan to check them out. The interesting thing is that these are billed as “German Christmas markets”. Not French markets, or European markets, but German markets. There is probably a story there, but I have no idea what it is. In preparation, the Christmas lights are everywhere.

One final thought. With all the talk about supply crunches we’ve been hearing there will even be a shortage of Christmas trees. I think we may have figured out the reason for the shortage…

I haven’t posted in quite a while. I usually post when I have the opportunity to take pictures of new and interesting places. Like when I travel. And you know … there has been this pandemic thing that has thrown a wrench in the works for travel. But things are slowly returning to normal so we decided to take a train trip to Quebec city. We are staying in the old city, which is a wonderful place. And it is getting ready for Christmas, so lots of lights at night. Here are a few to give you an idea.

And finally, the lovely little restaurant where we ate dinner.

It’s October and the leaves are near the peak of their colour.

No need to say anything more.

It is strange the details that you can completely miss, until someone points them out to you.  We planted flowers in the pots on our patio this year, just as we do every year. They add a splash of colour to summer.

Do you see it?

The flowers come in clusters of individual flowers that form a tight circle.  Some of the petals are red, and some are pink, but it isn’t random. In each individual flower, the petal that points toward the center of the circle is red, while the rest are pink. And if you step back, the overall effect looks like a much larger flower.  I have no idea what the purpose is, but it is fascinating.  And to think that I could have gone the whole summer without even realizing it was there.

Go back and look at the first picture again.  Do you see it now?

To be completely honest, I’ve never really thought about where Dragonflies come from.  But if I had thought about it, I probably would have said they hatched from eggs and then … I don’t know … grew up … in obscurity … somewhere … until they started flying around my yard? Like I say, it really isn’t something I’ve ever thought about.

The day after returning from Dublin we visited friends who live on a lake and were informed we were in for a treat. It was Dragonfly day! We had no idea what they were talking about, but they were right – we were definitely in for a treat.

For those of you who aren’t familiar with the Dragonfly life cycle (like me until recently) they begin as an egg (no surprise there) but then spend up to four years as a nymph, living in the water and looking nothing like a dragonfly. This is where it gets interesting.  In the spring, when the water reaches the right temperature, all the mature nymphs emerge over a two-day period. They look like this. As I say, nothing at all like a dragonfly.

The nymphs come out of the water – thousands of them – find a suitable perch, and firmly attach themselves. And then, in something right out of “Invasion of the Body Snatchers” the mature dragonfly begins to force its way out of the nymph’s back. In this picture you can see tendrils emerging as the molting process begins. 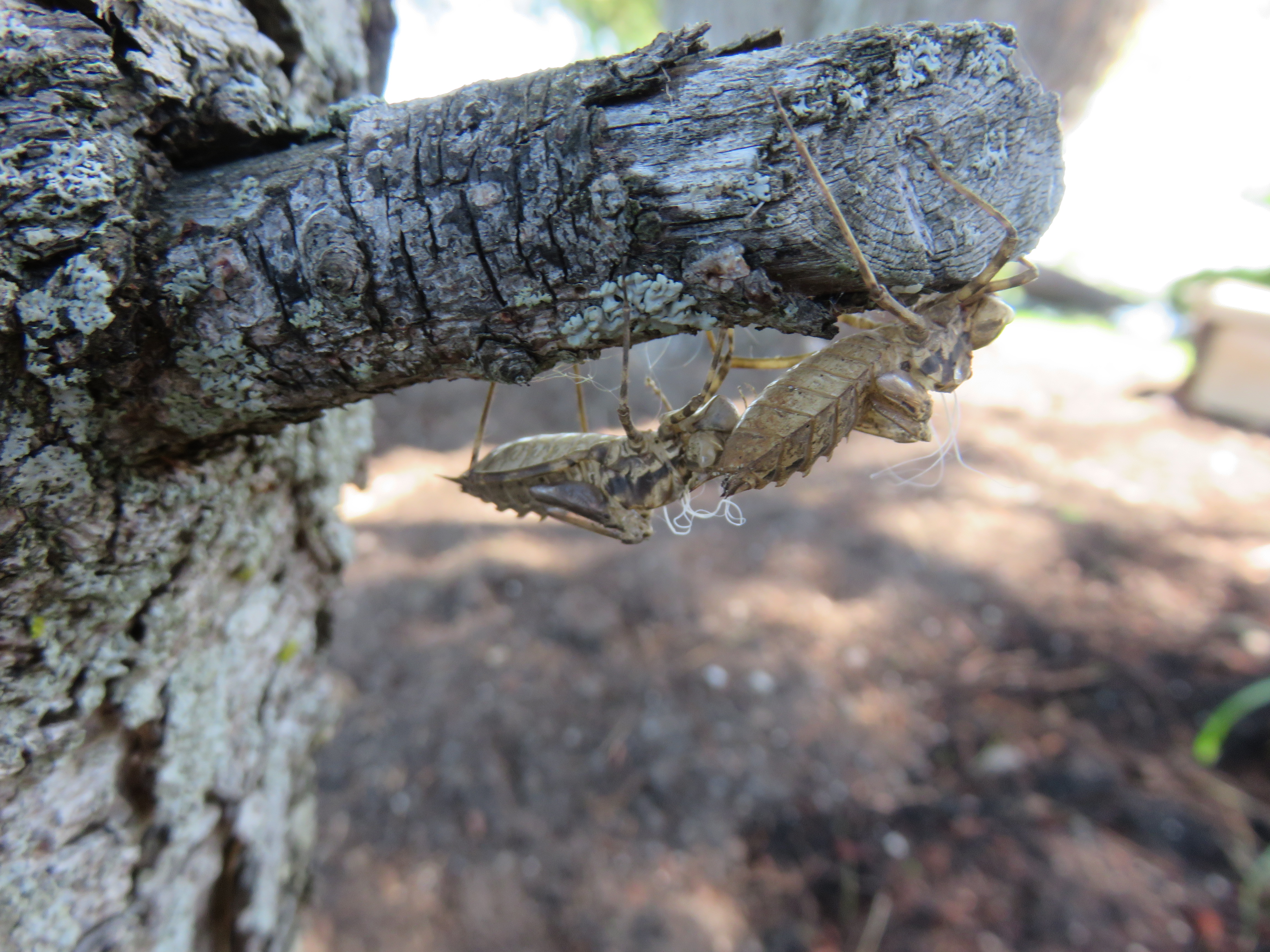 And then, defying the laws of physics, a much larger dragonfly emerges from the nymph.

Finally, the newly emerged dragonfly waits for its wings to unfold and dry. 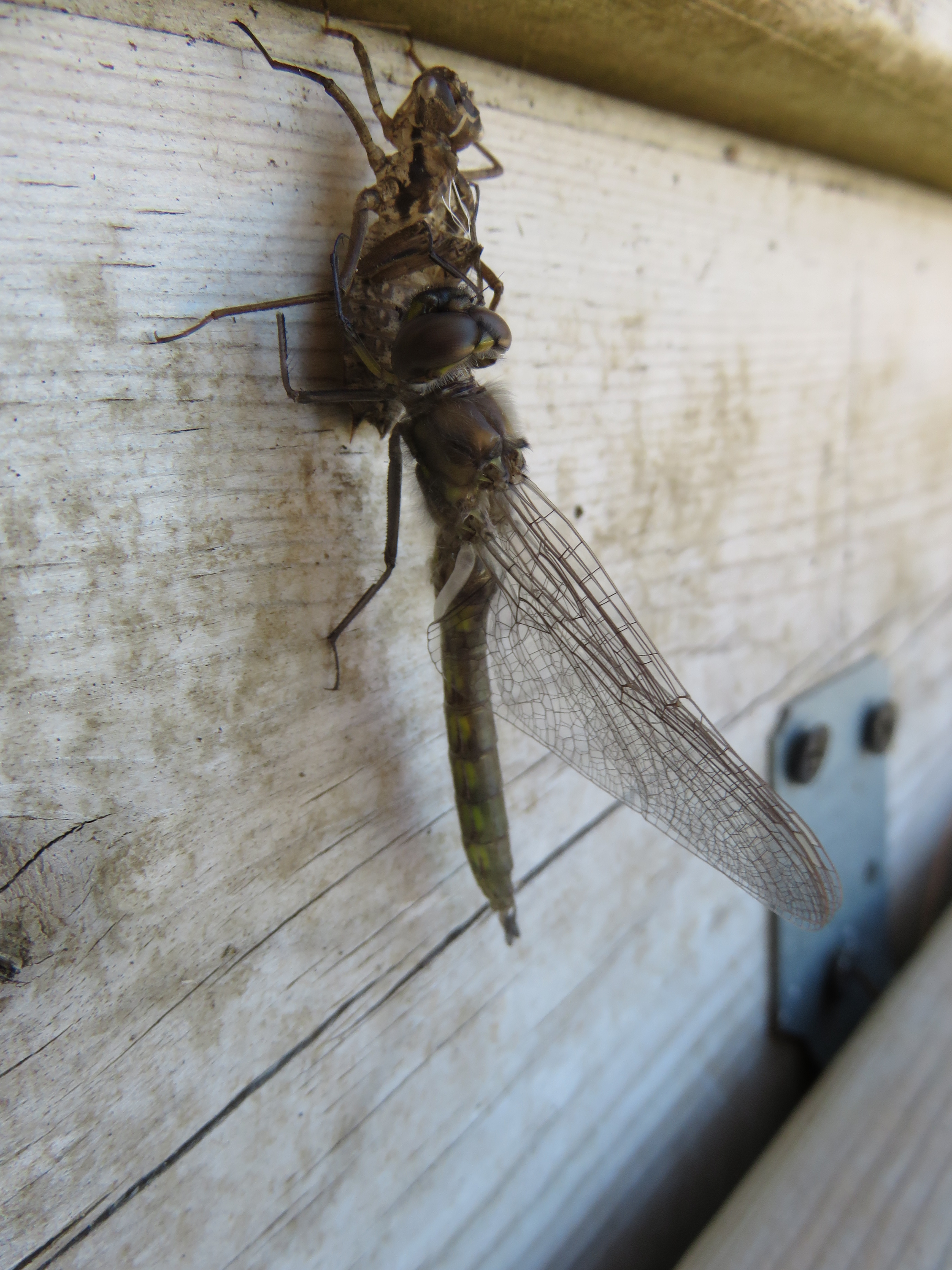 And there you have it. Thousands of dragonflies were emerging, perched on blades of grass, on the trees, on the dock – everywhere. It was amazing.

Interestingly, later that day we were eating in restaurant in an old farm house and the window pane had what appeared to be a dragonfly wing fused into the glass. 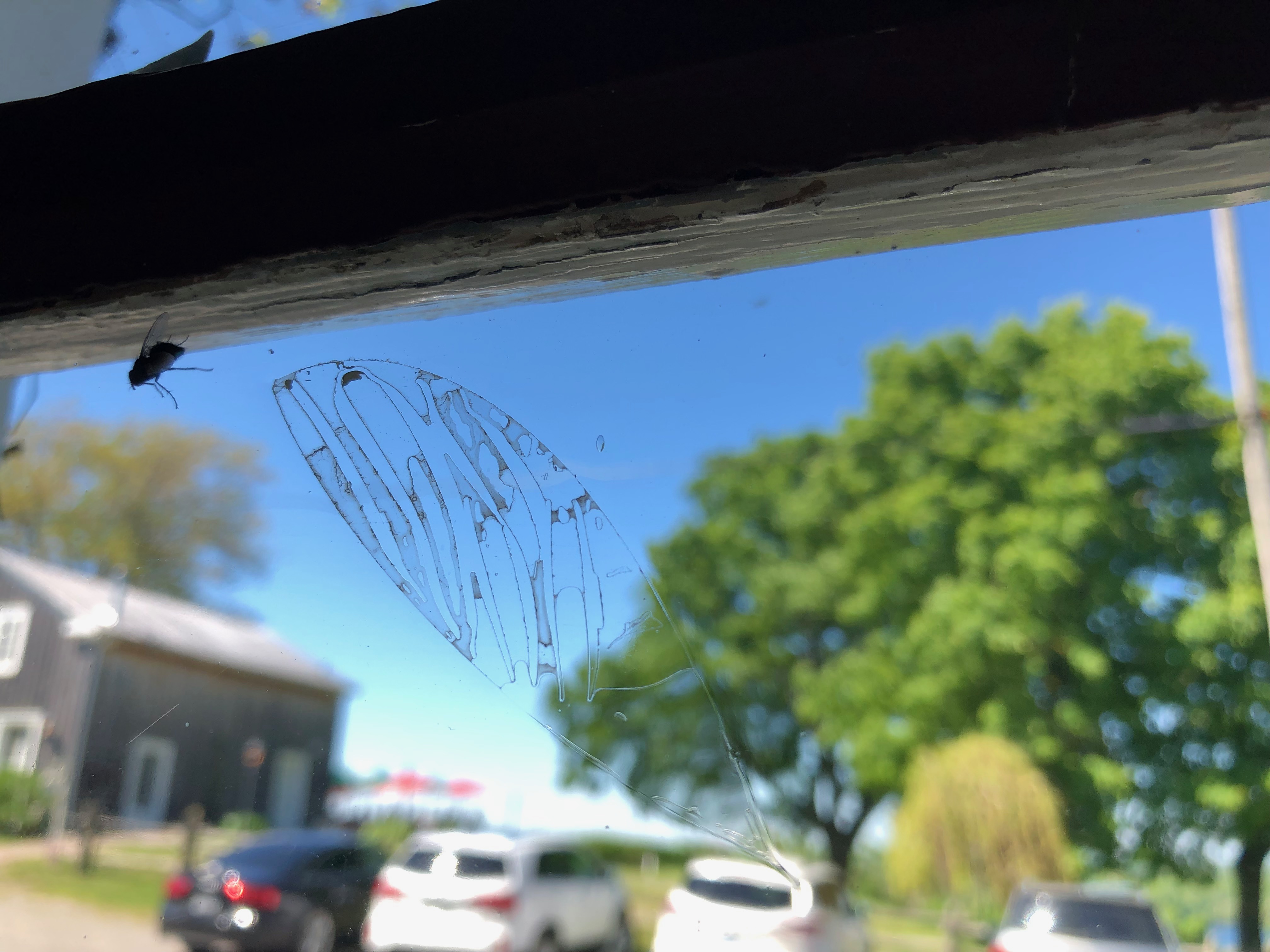 What an amazing coincidence.

We’ve always wanted to see the Giant’s Causeway, so we absolutely had to include in on our itinerary for this trip. We had considered renting a car, but in the end (fortunately) we opted for a bus tour to spare us (and by “us” I mean “me”) from driving and navigating. The bus took us along the Antrim Coastal Road, through pretty little villages and gorgeous views of the countryside and the sea. We would have loved to stop and enjoy the view every few minutes, but of course that wasn’t possible. It wouldn’t have been possible even if we had rented a car because the road was very narrow and winding, with absolutely no shoulder.

Before reaching the Giant’s Causeway we stopped at Carrick A Rede, with its narrow rope bridge suspended 100 feet above the ocean. We decided to pass on actually crossing the bridge (you had to pay) which left lots of time to enjoy the wild flowers and views of the ocean.

Then, after a short stop for lunch, it was off to see the Giant’s Causeway.  Before pictures, I want to provide a few impressions.

It is deceptive. As we approached the site I was initially underwhelmed, but as we walked around it became more and more impressive.  Well worth a visit.

It is very popular.  We were visiting outside of peak season, and it was a cold rainy day, yet the site was packed. Well, not exactly packed, but far busier than we would have liked. In an ideal world we would have had the place to ourselves. I know – fantasy – but let me dream.  Now pictures.

And before you ask, there really were a lot of people there.  I had to try very hard to get pictures without anyone. One of the surprise highlights at the Giant’s Causeway was the seal we saw in the ocean.

The last stop was at the Dark Hedges, made famous in Game of Thrones.

The trees were planted in 1775 – almost 250 years ago.  Unfortunately they are nearly at the end of their lifespan.  Almost half the trees have already fallen over, and they believe that within a decade they will all be gone.  One blew over a few weeks ago, and fell into a farmer’s field – so he has put it up for sale. True story.

We took the train to Belfast late yesterday, and checked into our hotel before having a light meal and retiring early.  We’ve been traveling for over a week now, so today we decided it was time for a quiet day.  We had a late start and then wandered around the center of the city without any particular objectives. The architecture is very different than Dublin.

Although buildings are generally in great shape, there are a few that are showing signs of wear. 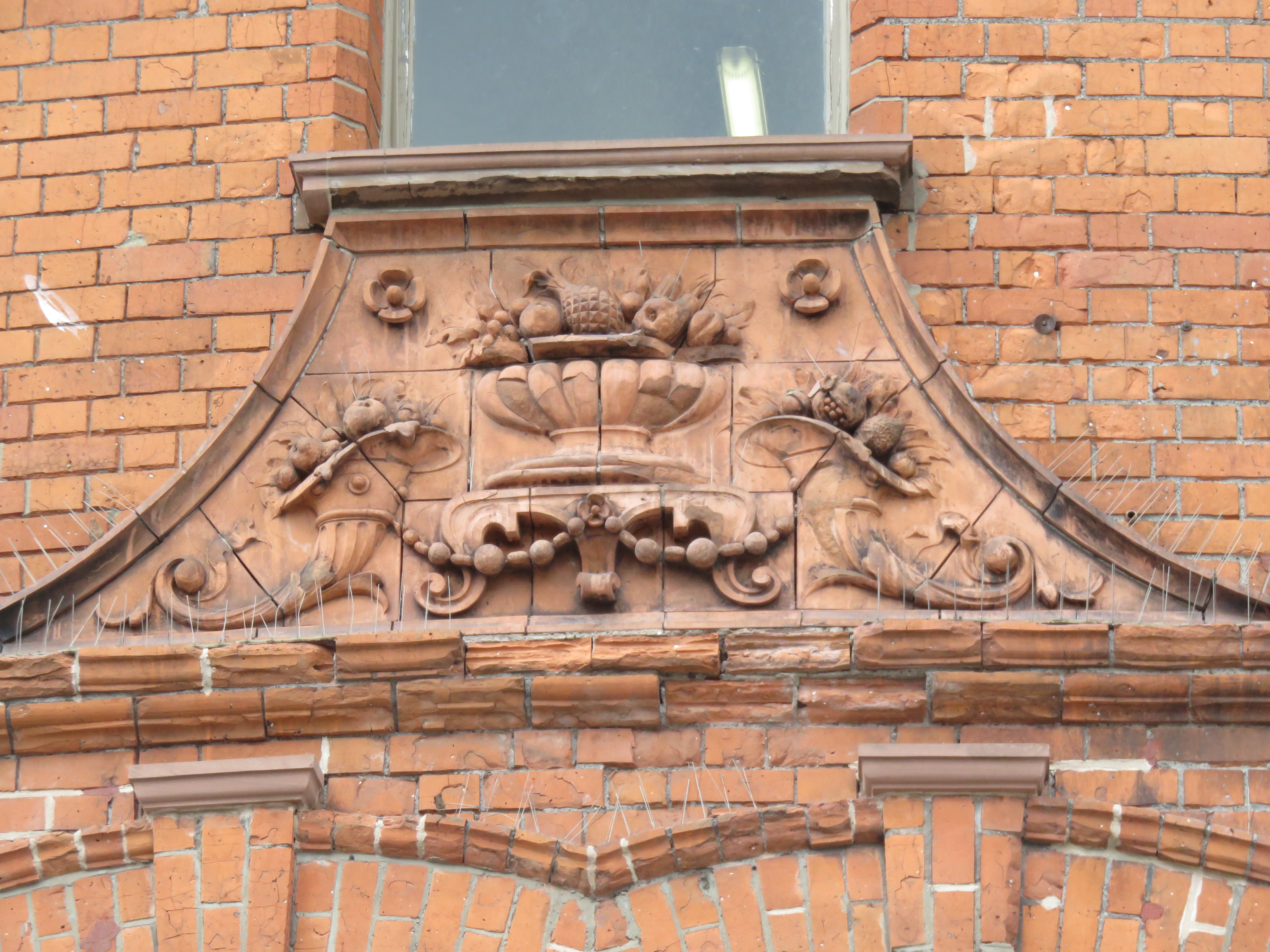 And there are one or two that are seriously the worse for wear.  This building was in the middle of the shopping district, and at ground level it didn’t look that bad, but when you looked up, it almost reminded me of Panama.

In our wanderings, we came across the Botanic Gardens, with an interesting sculpture near the entrance.

The flowers in the gardens were great. 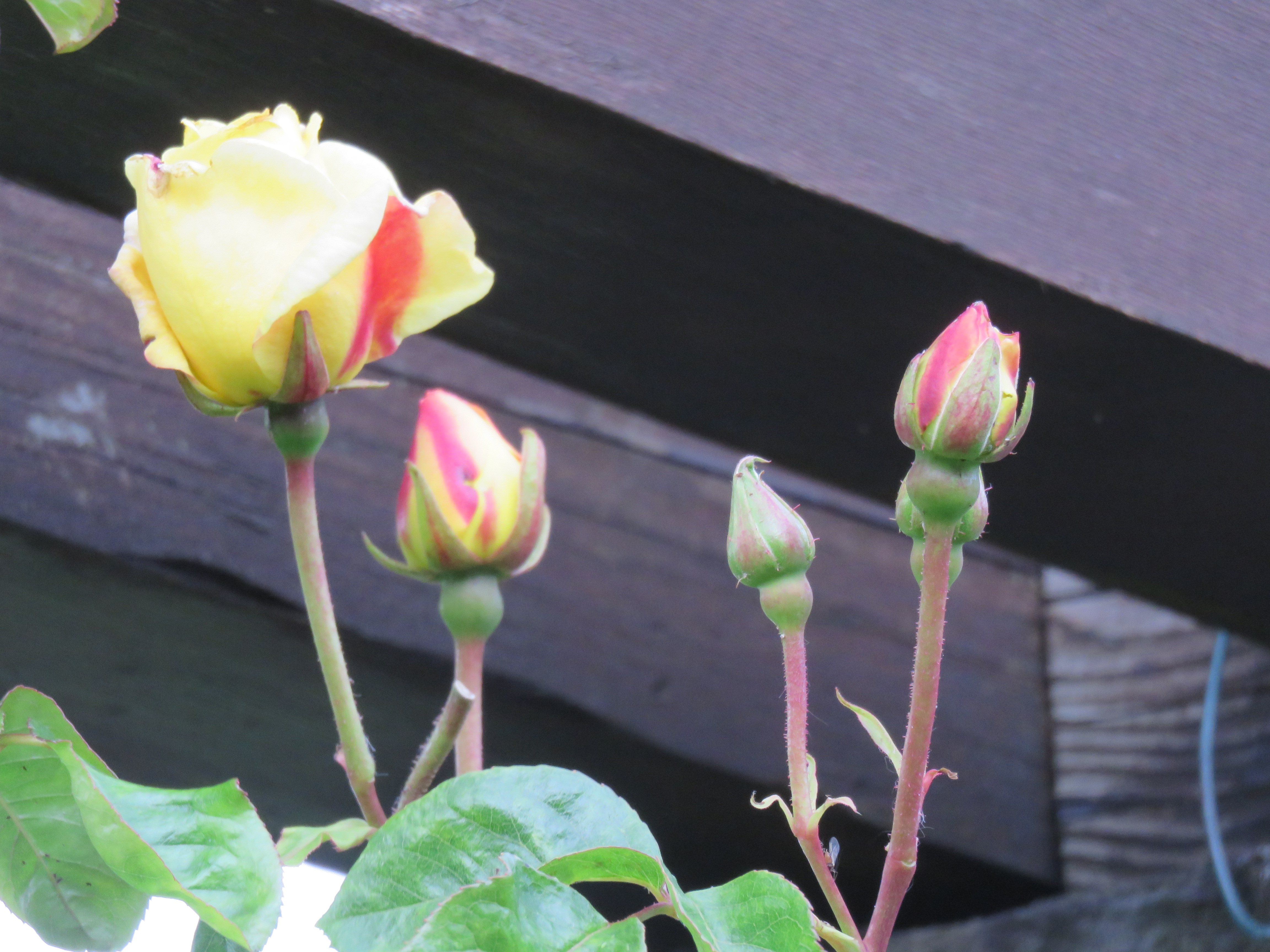 And then we mad our way along the river back to our hotel. Looking across the river we could see abandoned industrial buildings with rolling hills in the background.

Tomorrow we’re off to the Giant’s Causeway.

When we were planning this trip, people kept asking us what we planned to do for a full week in Dublin – as if you could possibly see everything that Dublin (or any other city) has to offer in a week. We haven’t had any trouble finding things to keep us occupied.

On our last full day we visited the Book of Kells. It is an illustrated manuscript gospel book dating to 800 AD. It is interesting, but to be honest, the most interesting part of the visit was the Trinity College library.

And then, as we were getting ready to check out of our apartment, we discovered it was built on the site where Handel’s Messiah was performed for the very first time on the 13th of April in 1742 – with Handel conducting and playing the organ. We had a perfect view from our apartment of the statue in the courtyard commemorating the event.

We also discovered the perfect bar, with interesting events every night of the week. 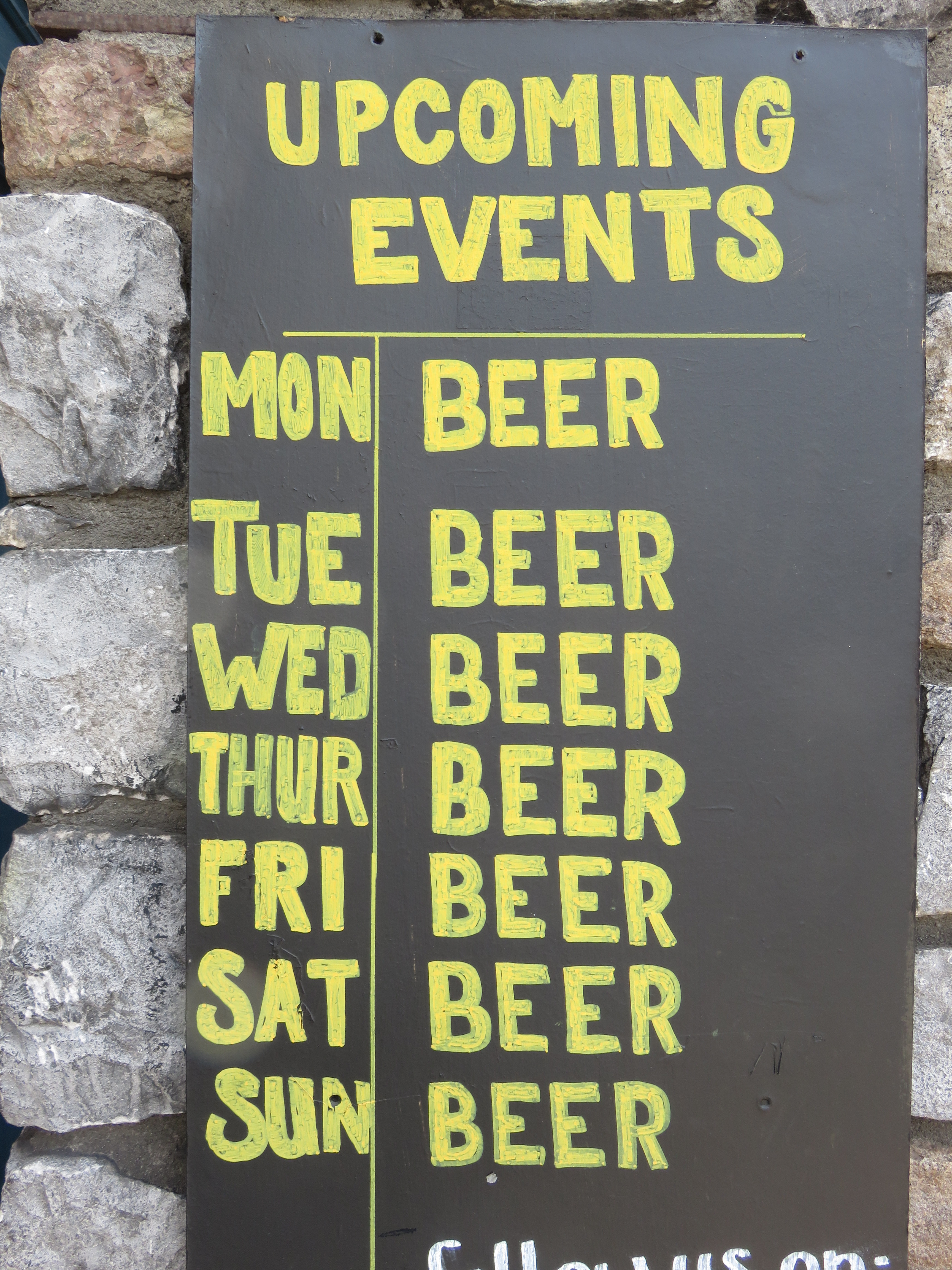 We will be back.