On my first visit to Jordan we hiked down Wadi Dana, emerging into Wadi Araba near Feynan Lodge. We had heard that you could still see ancient copper mines in the area, so when we spotted this, we figured that is what it might be.

You could just catch a glimpse of something that appeared to be the opening to the mine, and the pile of black rubble was clearly man-made. But beyond that, the details were, to say the least, unclear. To be completely honest, the fact that Feynan lodge offered an “Ancient Copper Mine” tour was one of the reasons we decided to visit in the first place.

All of which brings me to the subject at hand. Copper mines…

It turns out that at least some of the copper mines look pretty much like you would expect an ancient mine to look.

From all of the blue-green rocks around the mine, it probably wasn’t difficult to figure out there is copper in the area.

One of the things that really confused us initially was the rubble around the entrance to the mine. From a distance, it looked like slag – the leftovers from the smelting process. But that really didn’t make sense. It seemed unlikely they would smelt the ore right outside the mine entrance. But then, when we went inside the mine…

Suddenly everything was clear. It turns out that just below the vein of copper ore there is a layer of loose packed rock that literally crumbles away when you scrape at it with a rock. The source of the rubble around the mine entrance was explained. And mixed in among the rubble, it wasn’t hard to find chunks of copper. 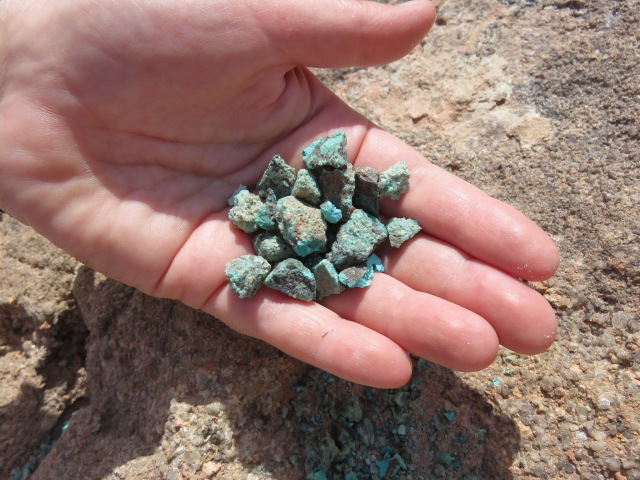 But we were still left with the question of the smelting. We had also heard there were slag heaps in the area, and ruins of the old smelters. So after the copper mine tour we went exploring a bit further. This is one of the things I really love about Jordan. If you want to explore a bit further, no one is even going to notice, much less say anything.

While we were exploring, one of the more interesting features we spotted was a series of crumbling arches. 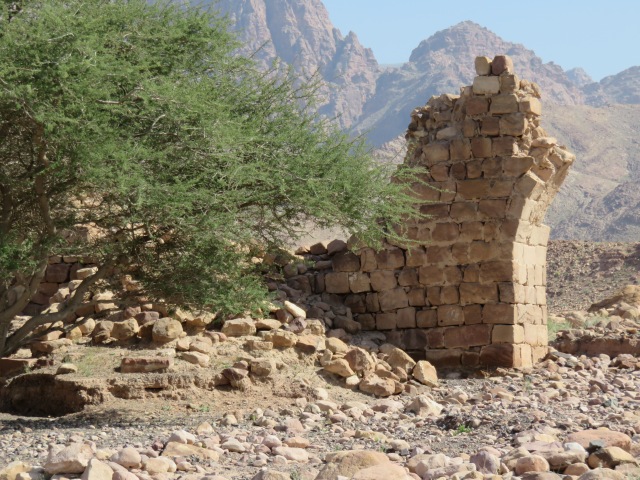 It really didn’t seem to make any sense. It was too narrow to be a bridge, and the arches meant it clearly wasn’t a dam. Then we climbed up to the top, and once again, everything became clear.

Even to our untrained eye, this was obviously an aqueduct. And there, in the background, were the slag heaps we had heard about. The pieces started to fit together. We had read that water was an important part of the smelting process, and here was an aqueduct bringing water to the smelter.

We followed the path of the aqueduct, as best we could, and before long we came to a large cistern.

We like to think we are pretty clever sometimes, and yet, here was this aqueduct with a “filter” to catch large debris from the aqueduct so that only relatively clean water made it into the cistern. But the stairs at the other end were a bit of a mystery. We hypothesized that they were to allow slaves to clean out the silt that did manage to make its way into the cistern. But when we went around to the other end, it became clear that the steps were used to bring the water up from the cistern into the next section of the aqueduct on the way to the smelter.

And finally, at the end of the aqueduct, was the smelter, buried in the ground with a channel to provide cooling water as needed.

Clearly there is a lot more detail behind this, but by the end of the day we had a much better understanding of how the ancient copper mining and smelting process worked.

The opportunity to explore in this way is one of the truly special things about Jordan.