We thought we had all day for our return trip to Jordan, but we discovered the border closes at 1:00 PM on Saturday. We moved up our departure to leave enough time to visit Jericho.

For many of us, the only knowledge we have of the Middle East comes from the media. As so often happens, news reports are reasonably accurate in some areas, but completely off the mark in most respects. Crossing into Israel was an eye opening experience, as was seeing the wall, but most of the time Israel doesn’t feel all that much different than any other unfamiliar city, whether it be in America, the UK or Europe. In many ways Israel has a familiar feel about it … until you come across a sign like this… 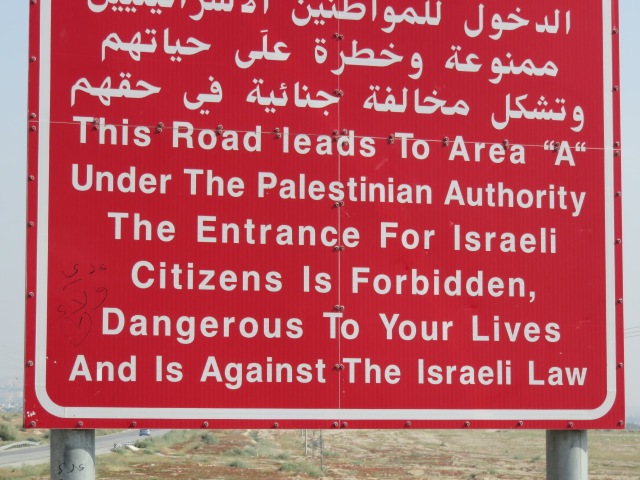 I find it interesting that “dangerous to your lives” is tucked into the middle of the sign, where a casual observer might easily miss it. Perhaps this road doesn’t attract all that many casual observers. And if it did, I suppose the checkpoints, manned by young troops with semi-automatic weapons, would pretty quickly clarify things. Near as I could tell, in Jerusalem the weapons were not loaded (though all the troops had fully loaded magazines readily available) but here, the rifles were definitely loaded. In spite of this, or perhaps because of this, everyone is surprisingly friendly. I suspect that having the right passport didn’t hurt. Of course, once you are through the checkpoints, everything is back to normal. Whatever “normal” means.

Our objective was Jericho. Specifically, the monastery built into a cliff high above Jericho. 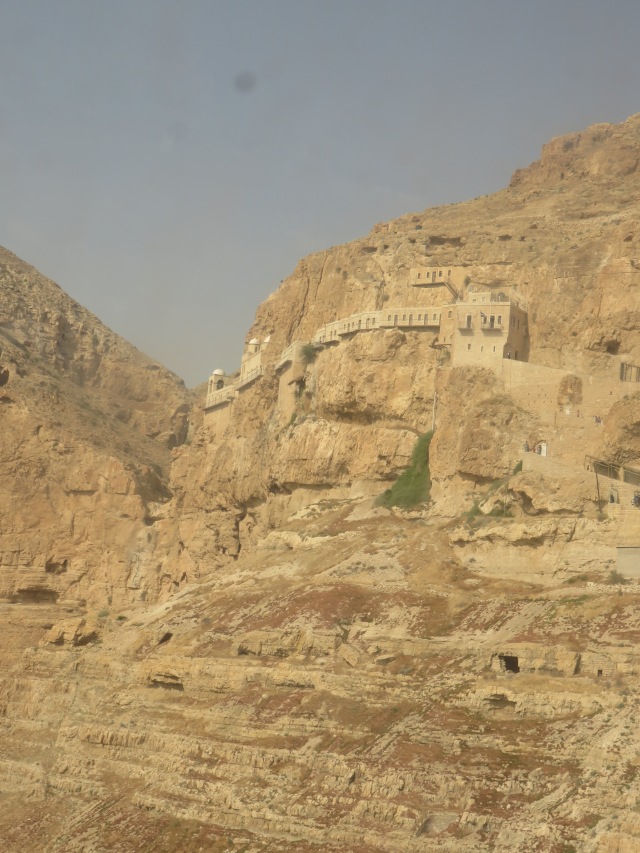 When you see the monastery from below, it is pretty impressive. But when you get to the top and look down at the cliffs surrounding it, you cannot be anything but amazed.

The monastery itself is unusual on so many levels it’s hard to know where to begin. It is surprisingly small and yet it is also amazingly well equipped. I was impressed by the efficient use of space. For example, it contained a chapel hewn into the rock, taking full advantage of the available space. In some places the walls consisted of rough rock, contrasting with the elaborately adorned statues.

The accommodation was spartan, but with surprisingly benefits. For openers, because the rooms were perched on the cliff, they had stunning views over Jericho. And near as I could tell, they all had balconies. I’ve never had a burning desire to become a monk, but if I ever were to try it, this would be the place.

A narrow path ran between the rock face and the rooms.

Of course, the first thing that comes to mind (at least for me) is “why build a monastery here?”. As it happens, when Jesus went into the wilderness for 40 days, this is the place where he was tempted by the devil. The chapel is built around the very stone where he sat during his temptation.

Or so the story goes. Of course, now this is surrounded by very  ornate decorations.

With the border closing at 1:00 PM sharp, we were very aware of the time and headed back down to Jericho, where we saw one of the more unusual sights of the trip.

East meets west? Something tells me this will not be the last time we see this.

The trip through customs to return to Jordan was almost as “interesting” as the initial crossing into Israel. Start to finish it was over two hours, taking us well past the theoretical closing time, and involving 9 separate checks on our passports. Interestingly half the time was spent sitting on a bus waiting, with the engine idling, midway through the process.

But in the end we made it safely across the border, and back to Jordon, which  would have been pretty obvious even if we hadn’t just spent two hours in customs.

And when I say “pretty obvious” that is exactly what I mean.

If you’ve ever been to Jordan, you will know exactly what I mean. It felt good to be “home”.