A Rainy Monday in Barcelona

We woke late to discover that a light drizzle had settled in. After Sunday’s wonderful weather we really couldn’t complain. Besides, the jet lag was pretty much at its worst today (please dear God, let this be as bad as it gets) so truth be told, we didn’t want to get up at all. A bright sunny day would have only made it worse. But we finally managed to drag ourselves out of bed and have a leisurely breakfast with lots of coffee while we researched options for the day. By the time we left the apartment it was a little after 1:00. Fortunately by then the rain had tapered off.

First order of business for the day was … lunch. Carrer D’Enric Granados had been recommended as a street packed with restaurants, so we headed in that direction. Along the way we scoped out a restaurant that had been on our short list for last night. We didn’t have the energy to walk there yesterday, but today we opted for the daily fixed price meal. The price included four courses – wine, appetizer, entree, and coffee. Very civilized. The clientele appeared to be mostly local. When we sat down a little after 2:00 it was empty; by the time we left at 3:00 it was packed.

After lunch we walked down la Rambla to the port, enjoying the architecture along the way. 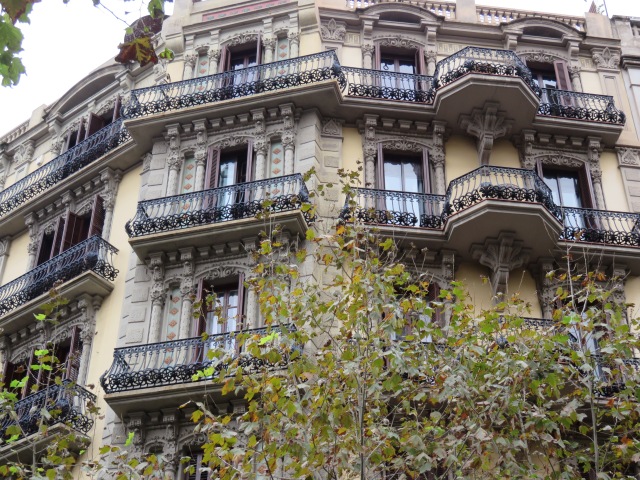 The street featured many iconic Barcelona buildings such as this one by Gaudi.

Of course there are a range of styles, including those that are relatively modern.

At times the styles almost clash, and yet they somehow all work.

The end of La Ramble features a Monument a Colom – or Columbus Monument.  A statue of Columbus is at the top of the column, but some of the detail work near the base seemed equally interesting. 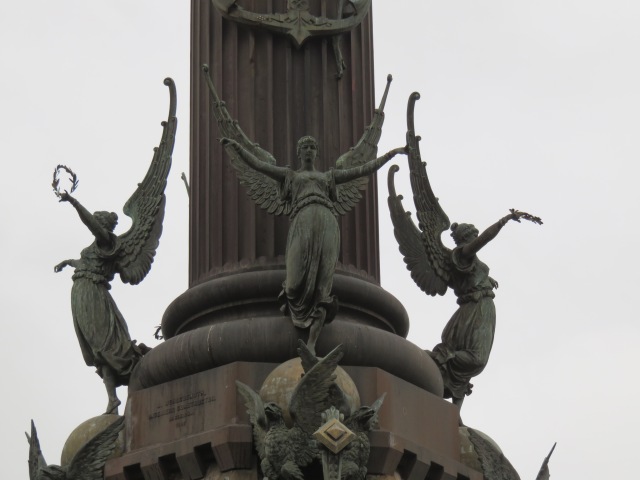 Yesterday we thought the park was fairly busy, but La Rambla, even on a rainy Monday in the off season, was far busier. And I’m sure it gets worse. It is lined with outdoor cafes, though today most of them were closed, and the ones that were open were only half full. In the summer I suspect everything is packed – cafes, sidewalks, and the street. Wall to wall people, no doubt. I much prefer it now.

Eat, Drink, Travel, Write...
View all posts by If It Was Today →
This entry was posted in Photography, Travel and tagged Barcelona, Photography, Spain, Travel. Bookmark the permalink.